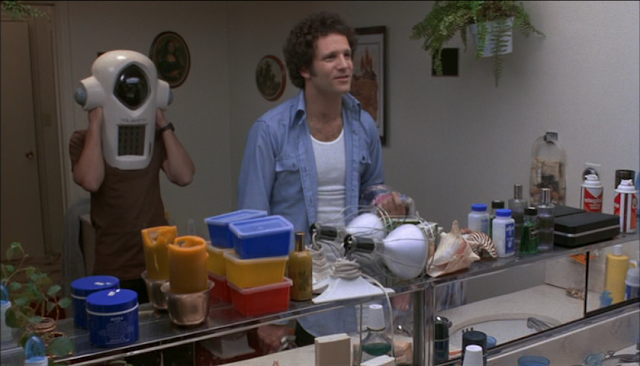 In 1971 PBS decided to make a television documentary called 'An American Family'. a documentary about a real ordinary american family. They followed them around every day for many months, but what they got was the real turbulence and scandals that unfortunately happens in every families. Albert Brooks' comedy 'Real Life' is spoofing 'An American Family' where Brooks is playing a fictional version of himself trying to direct a similar TV show, where the chosen Family, the Yeagers would have been better off without cameras following them around every single day.
Real Life is a good comedy that some what displays what would actually have happened in a satirical way. Because most of their worries are what everyone else will think about them, and how Brooks is trying his best to make the things better for the Yeagers, while the psychiatrists urge him not to interfere in any way. Brooks might be a bit too crazy sometimes, but he's the unfunny clown that we feel sorry for. But it's Charles Grodin and Frances Lee McCain as Mr. and Mrs. Yeager who are able to pull it off with two realistic performances. Overall, It's an alright good dark comedy with some over-the-top moments and with a good story. Thumbs up.
Grade: B-
You can read all my reviews on:
http://letterboxd.com/jentak19/
Posted by Jens Takle at 10:27