THE GARDEN OF THE FINZI-CONTINIS 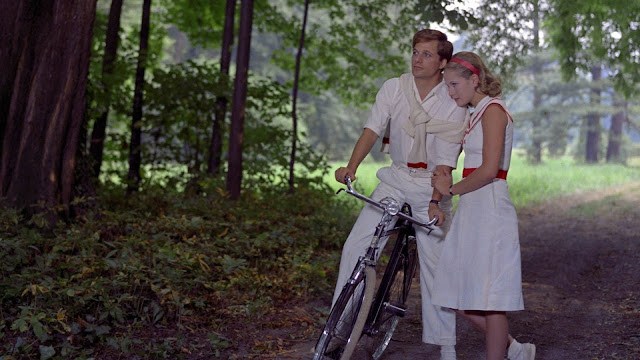 Vittorio De Sica's The Garden of the Finzi-Continis is based on the historical novel by Giorgio Bassani that are partially based on his own experiences of being a Jew in the town of Ferrara in the thirties and forties, during Mussolini's fascist dictatorship, where the Jews was counted as third class citizen and was later deported to the concentration camps. This film follows a group of teenage friends, both Jewish and Non-Jewish, and how the political situation is effecting their lives.
The Garden of the Finzi-Continis is a good and melancholic history drama, pretty similar to Bertolucci's The Conformist. It's also as beautifully photographed, with all it's naturalistic colors and the leafs on the trees blowing in the wind, which symbolizes death. I also love all the different personalities and how they act under pressure, and some even don't see the point of living a joyful life, because of the political situation. A great war drama. Thumbs up.
Grade: A-
You can read all my reviews on:
http://letterboxd.com/jentak19/
Posted by Jens Takle at 08:19