"A Step up from Quatum" 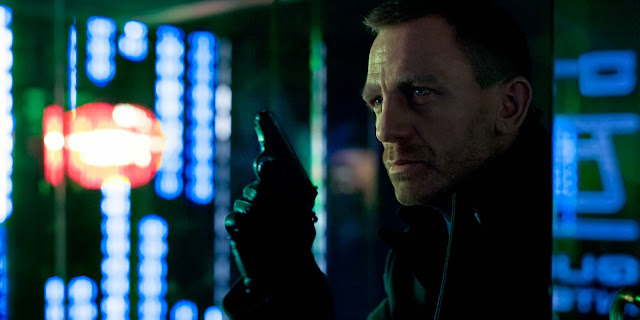 
Finally it's here, the 23rd James Bond movie, Skyfall. And it's released on the 50th anniversary of the whole James Bond franchise. Skyfall is the right way to celebrate, because after the disappointing vengeful Bond in Quantum of Solace, James Bond is finally back in his original form as he was in Casino Royal, plus with some delightful references to the good old fashion Sean Connery films of the sixties. I'm not the conservative type when it comes to genres and conventions. But the James Bond movies has become a genre on it's own, these film are meant to be entertainment, he's suppose to be all men's role model. And after years of CGI bull crap and character changes, James Bond finally goes back to his roots.

This time, Agent 007 AKA James Bond (Daniel Craig) is being hit by a bullet from another MI6 agent was suppose to shot the guy Bond were fighting, and Bond falls from a moving train into a waterfall. Bond were chasing after a guy who have a hard drive with secret information about NATO agents, and their identities. Bond officially dead, but he's survived and is enjoying his life as dead in a tropical location. But after a computer virus that caused a gas explosion in the MI6 headquarters, Bond returns from the dead and his mission is to find the hacker who is responsible for this.

I really enjoyed this Bond film. It is thrilling, good action scenes, exhilarating fighting sequences in high speed with a gentle touch of comedy that is essential to every Bond film. And not to give a way the plot, but the last half hour was truly one of the best moments in the whole franchise. Bond's mojo is also back, the true gentlemen who knows how to treat the ladies, and this time the hot and sexy Bérénice Marlohe. It's like Quantum of Solace never happened, and to even bring more comfort by adding references from the older Bond movies that I probably don't need to mention because you gonna recognize them easily.

But Skyfall is also more modern, in that sense that the biggest threat now these days is hacking, a field that is most familiar among young people. That's the reason why this time Q is played by the 32-years-old Ben Whishaw, and that shows us that James Bond is relevant today, although Die Hard did this five years ago. But what I liked the most about this film, is the relationship between Bond and M (Judi Dench) when her trust is set on trial, both by Bond because she ordered the shot that hit him. And also the government starts to think that she's to old, and even questions the existence of MI6. It is without a doubt dark times for the MI6 which is quiet unusual, and which creates the right thrilling atmosphere.

But there were some dull moments, and I'm not so sure when it comes to the Bond villain, Silva played by Javier Bardem was a very good choice. He's not by any way unforgettable, and seems not to be very dynamic in his choice and often waits to long to get things done, just for the sake of the plot, and his motivations for his action is often very weak. And why does he have blond hair? The positive I can say about him that his crazy enough to be a villain that you just have to respect that, it was a good performance, just not the right character.

My conclusion of the 23rd James Bond film is that it's a great contribution to the whole franchise. It was if Quantum of Solace never happened and it seems like things truly are back to normal, and that Daniel Craig have a golden age ahead of him. Thumbs up.

You can read all my reviews on:http://letterboxd.com/jentak19/
Posted by Jens Takle at 16:48