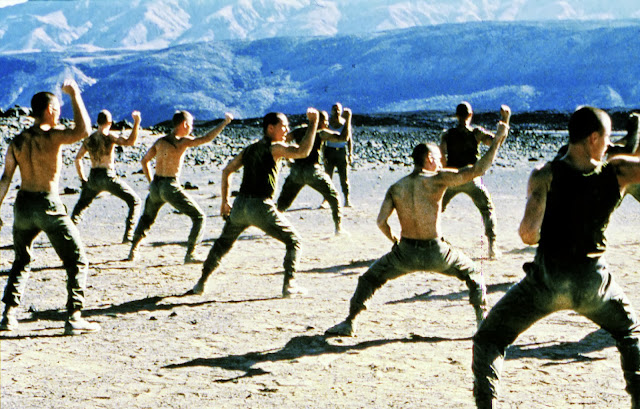 Claire Denis' Beau Travail is actually loosely based upon Herman Melville's Billy Budd. But instead of a british naval vessel in the 18th century, Beau Travail is set in modern day Djibouti where we follow the French Foreign Region. It's the story about the former sergeant Galoup (Denis Lavant) who reminisce about his days in Djibouti and his fellow soldiers and his despite for lieutenant Bruno Forestier. It is a tough army life. As Galoup says "Your life is the region".
Beau Travail is a great film, a truly poetic one, with plenty of male erotism, with all the soldiers being photographed like greek gods, the same poetics structure as in Jean-Luc Goddard's Le Mépris. It's like Denis is doing the same thing as every other male director have done with women. She does a great job in portraying men as beautiful and vulnerable, with the same platonic friendship as females.
The film features some marvelous performances, specially Denis Lavant's misanthropic performance as the former sergeant who knows how to dance, exquisitely shown in one of the greatest dancing scenes ever. The cinematography are also breathtaking and extraordinary. There's no yellow sand, it's either grey or white. It's like walking on the moon, an unknown territory that makes all the characters and the time weightless. A wonderful poetic weightless motion picture. Thumbs up.
Grade: A-
You can read all my reviews on:
http://letterboxd.com/jentak19/
Posted by Jens Takle at 15:54